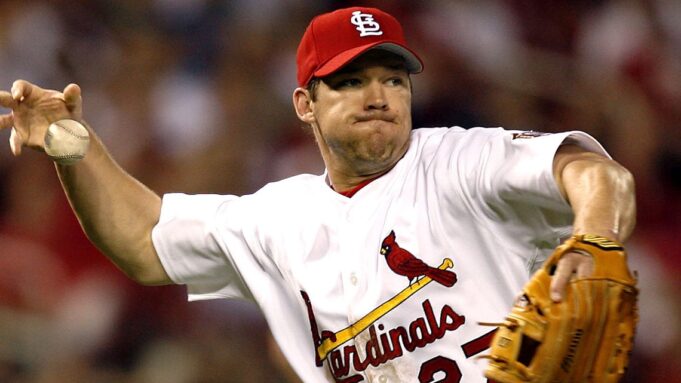 Scott Rolen made it into the Hall of Fame after six tries and one scary loss. Scott Rolen was named to baseball’s Hall of Fame on Tuesday night. He got votes on 76.3% of ballots, which was just five more than the 75% needed.

With Rolen’s election, the Baseball Writers’ Association of America avoided a Hall of Fame shutout for the second time in three years and only the 10th time in nearly a century of voting.

Scott Rolen was on 297 of the 389 ballots sent in, which is five more than the 292 needed to be elected. Todd Helton, the first baseman for the Colorado Rockies, wasn’t as lucky: He was on 281 of the 389 ballots, which was just 11 short of getting in. Helton got 72.3% of the vote in just his fifth year on the ballot. This almost guarantees that he will be elected, even though he still has five more chances.

Rolen’s selection means that Fred McGriff won’t be the only home run hitter in Cooperstown, New York, on July 23. In December, the Contemporary Era Committee of the Hall of Fame chose McGriff because he got the most votes from writers (39.8%).

What will happen next with the holdovers?

Like McGriff, Helton and Wagner will have 10 chances to get into the Hall of Fame. Even though they didn’t make it Tuesday, they should get in on one of their last tries. In his first year on the ballot, Scott Rolen only got 10.2% of the vote. In his third year, that number doubled to 35.3%, and in 2022, it reached 62%. This is a good sign that he will eventually be inducted.

Both Helton (with five more chances) and Wagner (with two more shots) should be encouraged. Andruw Jones, who played centre field and hit 434 home runs and won 10 Gold Gloves, also got a nice boost, going from 41.4% to 58.1% in his sixth year.

Rolen only finished in the top 10 for MVP once, in 2004 when he was fourth. However, he was an All-Star seven times and won eight Gold Gloves for the Phillies, Cardinals, Blue Jays, and Reds. He won the World Series with the St. Louis Cardinals in 2006.

Rolen’s 70.1 career Wins Above Replacement puts him in a tie for 69th place and puts him ahead of a number of Hall of Famers. The high number shows that modern metrics can better measure Rolen’s overall value to his teams.

Oddly enough, Scott Rolen is tied with Carlos Beltran in career WAR. Beltran made his ballot debut this year and got 46.5% of the votes, which isn’t great but isn’t terrible either. Beltran is a switch-hitting centre fielder who has hit 435 home runs in his career. He is one of only five players who have hit at least 400 home runs and 300 stolen bases in their careers. But his role as ringleader in the Houston Astros’ sign-stealing scandal in 2017, Beltran’s last season, was expected to hurt his candidature at least a little bit.

In his 10th and last year on the ballot, Kent got the same number of votes as Beltran (181) and 46.5% of the votes. Gary Sheffield, a baseball player, got 55% of the vote on the ninth ballot.

Stopping a Hall of Fame shutout

This could have been the third time in the last 11 years that the writers’ ballot didn’t pick any players. In 2013, Barry Bonds, Roger Clemens, Mike Piazza, Sammy Sosa, and Craig Biggio, who all played during baseball’s so-called “steroid era,” joined the ballot for the first time. They were up against five players who had been on the ballot for at least 11 years.

Because of the stalemate, the Hall of Fame cut the number of eligible years from 15 to 10. This made Bonds, Clemens, and McGriff leave sooner, but it also seemed to give others a better chance.

Next year, Helton should have an easy time getting into Cooperstown, and third baseman Adrian Beltre is also a sure thing to get in.

admin - July 18, 2020 0
Four people have been arrested in Pakistan's northwest Khyber-Pakhtunkhwa territory for vandalizing an uncommon sculpture of Gautam Buddha found during exhuming at a horticulture...

US heatwave: Could US and Canada see the worst wildfires yet?

admin - July 14, 2021 0
After record temperatures, western parts of the US and Canada are bracing themselves for the annual wildfire season.There are warnings that this season could...