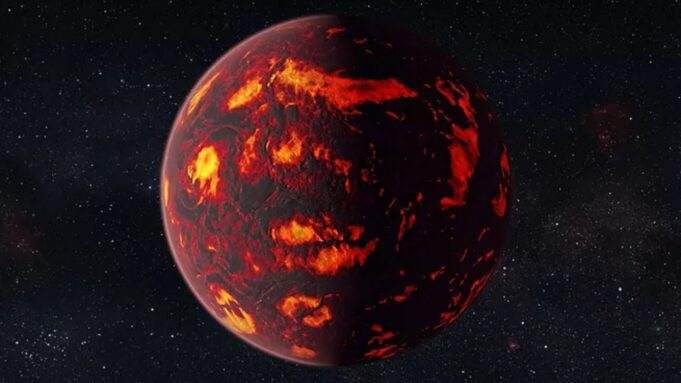 The “hell planet” that orbits a distant star and includes a massive lava ocean is too hot for humans, according to a new study.

New research explains how the “hell planet” became an orbiting ball of lava.

55 Cancri e, often known as “Janssen,” has a lava ocean-like surface and orbits its star in 18 hours.

The planet orbits Copernicus 70 times closer than Earth orbits the Sun, according to a Nature Astronomy orbital analysis.

The planet was always hot, but Copernicus, the red dwarf, and Janssen’s sister planets may have pulled it into its star’s equator, making it hellish.

Astrophysicist Lily Zhao conducted the study: “We’ve learned about how this multi-planet system — one of the systems with the most planets that we’ve found — got into its current state.”

The planet “was likely so hot that nothing we’re aware of would be able to survive on the surface” in its original orbit, the researcher said “.

According to Live Science, the researchers intended to analyze the faraway system to see how the planets have evolved and how it differs from our solar system, where all planets have nearly identical orbital planes.

Janssen, with its 18-hour year, was the first ultra-short-period planet discovered.

Its orbit’s minimum radius is about two million kilometers, compared to the Earth’s 147 million.

Zhao said this discovery could help scientists find livable planets and assess the likelihood that they would become lava-covered hellscapes.

“The habitable zone is a good indicator of whether a planet may support water-based life, but for life to form, it must stay livable for a long time.

To determine how long a planet has been habitable, it is necessary to understand how planets travel in systems with different numbers and types of planets and around different stars.

The scientists will also analyze the planet’s composition, with several guesses suggesting a diamond core.
“”Diamond may explain 55 Cancri e’s size and bulk, but we don’t know,” Zhao remarked. Because it’s hard to measure their masses, smaller, low-mass planets like 55 Cancri e’s composition are unknown.

“With the potential for more exact [radial velocity] measurements with EXPRES, we will be able to discover and determine masses for more of these planets and gain a better idea of what they might be made of,” she added.

admin - June 30, 2021 0
On 30 June 2020, China introduced the National Security Law (NSL) in Hong Kong in response to massive pro-democracy protests that had swept through...

admin - August 11, 2021 0
The Duke of York "cannot hide behind wealth and palace walls" and must respond to sexual abuse allegations filed in a US court, his...