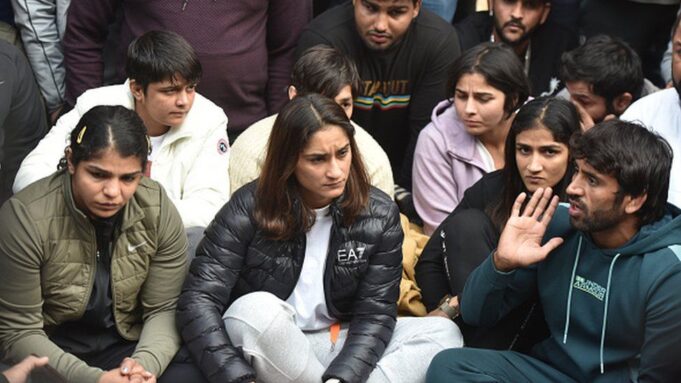 Protests have erupted in India after a prominent Indian athlete accused the chief of Wrestling Federation of India (WFI) and other trainers of sexually abusing women wrestlers for years.

Vinesh Phogat has said that at least 10 woman wrestlers confessed to her that they were sexually exploited by WFI president Brij Bhushan Singh.

On Wednesday, she made the claims at a protest in Delhi against WFI.

Mr. Singh has refuted the claims.

However, Vinesh Phogat and other female athletes have threatened to sit out international competitions until Mr. Singh is replaced.

Furthermore, they have refused to end their demonstration until the administration has addressed their concerns. India’s sports ministry asked for a response from WFI on Wednesday, and they have three days to do so.

Vinesh Phogat is one of India’s most accomplished athletes, having won medals in the World Championships, Commonwealth Games, and Asian Games.

The 28-year-old, who belongs to a family of international female wrestlers, is also a vocal critic of the sexist attitudes towards women in sports – in 2021, she told BBC Sports how she faced sexist remarks growing up and overcame gender stereotypes to forge a successful career as a professional athlete.

Phogat said that some of the WFI instructors hired at national training camps had “sexually harassed women wrestlers for years” at a protest at the Jantar Mantar historic site on Wednesday.

Too much trouble is caused by them, she said. “They get into our personal life and relationships.”

The wrestler said, “Singh is also involved in sexual harassment.” At least ten to twelve female wrestlers have confided in me that the WFI president sexually exploited them.

Vinesh Phogat stated that she had not experienced any form of harassment, but that she had heard death threats from officials close to Mr. Singh, which he strongly denies.

Many more wrestlers have spoken out since Wednesday, criticising WFI and Mr. Singh.

Among the protesters was Olympic bronze medalist Bajrang Punia, who said the WFI president operated the organisation in a “arbitrary manner.”

The federation, in particular, “doesn’t care how we are treated” following a medal win, he claimed.

Mr. Singh, who is also a member of Parliament for the BJP in the state of Uttar Pradesh in northern India, has denied the claims against him and has refused to resign.

“Is there any evidence that a wrestler has been sexually harassed by the WFI? Vinesh is the only one to have spoken it. If only one female wrestler ever comes forward to report sexual harassment, I can be publicly executed “claimed he in a public declaration.

Meanwhile, the protests have led to the cancellation of this week’s national wrestling camp for women by India’s sports authorities.

admin - October 3, 2022 0
Something like 125 individuals have kicked the bucket in a pound at an Indonesian football match that has become one of the world's most...

Danish Taimoor over the moon as Cristiano Ronaldo mentioned his comment

Pope Benedict XVI: Lying in state at the Vatican begins

admin - January 2, 2023 0
When the former Pope Benedict XVI's lying in state ceremony at the Vatican starts later, tens of thousands of people are anticipated to attend. Nearly...