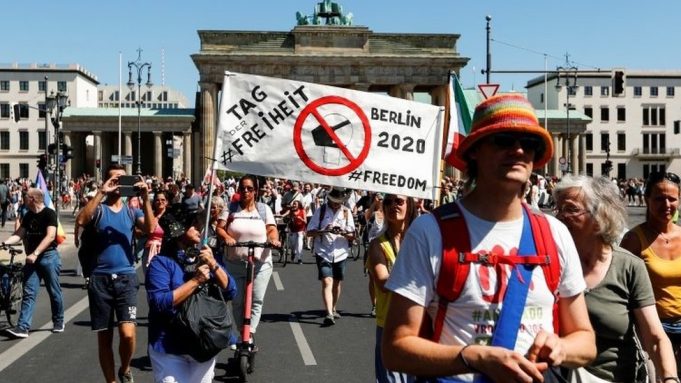 Despite a court order banning the protests, thousands of people gathered in the German capital to vent their anger over COVID restrictions. Police said they made almost 600 arrests.

Anti-lockdown protesters scuffled with Berlin police on Sunday, as thousands of people defied a court ban on demonstrations.

Police said some protesters had “harassed and attacked” officers in the German capital’s Charlottenburg district while ignoring roadblocks.

Around 2,000 officers in riot gear attempted to quell the unrest.

A police spokesperson said around 5,000 demonstrators took part in the protests

Altogether almost 600 people were arrested, while others were detained briefly to obtain their personal details, police said.

“They tried to break through the police cordon and pull out our colleagues. This led to the use of irritants, batons, and physical violence,” Berlin police tweeted.

They added that authorities had to use water cannons to disperse the protesters.

In one violent incident, several protesters pulled the local head of the DJU journalists’ union, Jörg Reichel, from his bike before hitting and kicking him, according to the daily Tagesspiegel.

The paper said he was rescued by passersby but suffered shoulder and leg injuries and was taken to hospital. 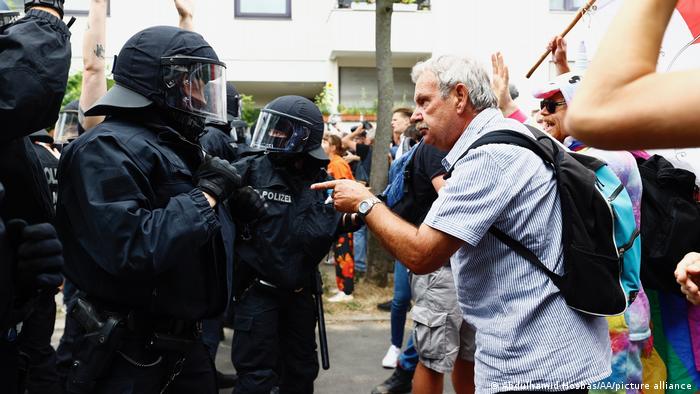 The demonstration was called by the “Querdenker” (Lateral Thinkers) movement, which has emerged as the loudest voice against Germany’s COVID-19 restrictions.

Judges had prohibited several of its planned gatherings this weekend, including one for Sunday that organizers expected would attract over 20,000 people.

The court said it could not allow the rallies to go ahead over fears participants would flout rules on mask-wearing and social distancing, at a time when Germany’s COVID infection numbers are on the rise.

The Querdenker movement has been particularly popular among anti-vaxxers and conspiracy theorists and has also attracted members of the far-right Alternative for Germany (AfD) party.