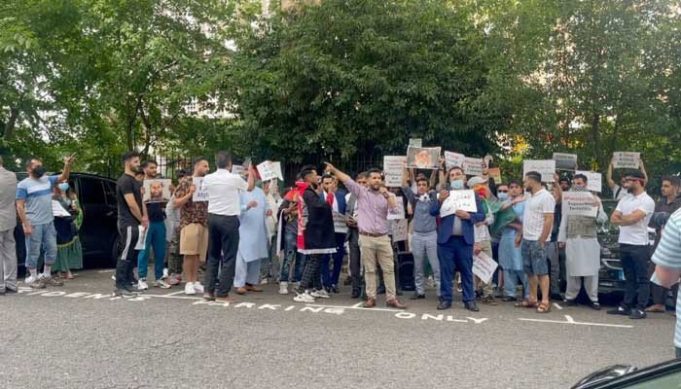 A group of Afghan nationals held a protest outside the Pakistan High Commission in London on Friday afternoon, which turned violent when a Geo News reporting team was attacked by some of the demonstrators.

“The Watan Group” had organized the protest to seek justice for the daughter of the Afghan ambassador to Pakistan, who was allegedly kidnapped in Islamabad two weeks ago. Around 50 protesters took part and raised slogans against Pakistan.

There were three incidents of violence. At the start, a protester punched this reporter and hit his phone while filming the protest. Immediately after that, this reporter called the police and informed them of the attack. The police arrived after over 40 minutes. Just before the police arrived, around five protesters marched across the road where Pakistani media was present and one of the protesters punched this correspondent, fracturing his thumb and making the phone fall on the ground.

Minutes later, a Pakistani student, Ehtesham Hasan, 20, who argued with the protesters peacefully, was cornered in Knightsbridge. Geo News cameraman Naseer Ahmed, who was filming the incident, was also attacked by three protesters who broke Geo’s logo and mic and beat him up in the presence of witnesses. Around a dozen Scotland Yard officers reached the protest venue after a complaint was made to the police about the attack.

The police took statements from this reporter and Ahmed. The police then watched the CCTV camera footage and confirmed that a violent attack had taken place and that it was unprovoked.

The Scotland Yard officer incharge said: “We have reviewed the footage and can confirm that the assault took place. With help from the footage, we will investigate this matter further. We have given crime reference numbers to the victims.”

The Watan Group’s chief organiser said he was unable to control the youths because “they were upset at the kidnapping of the Afghan ambassador’s daughter”. When told that it was the organiser’s job to keep the protest in control, he said he cannot comment further.