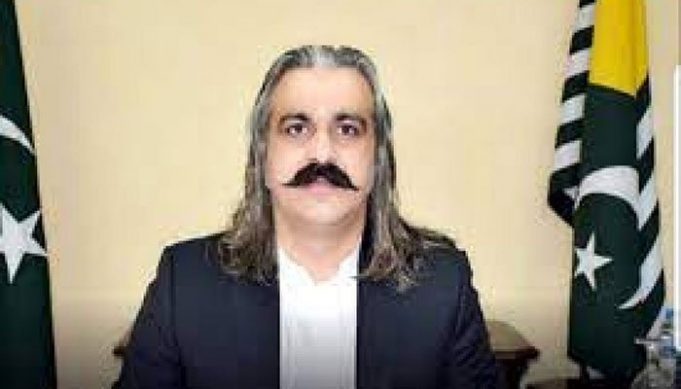 He cited the incident that took place when he, along with Minister for Communication and Postal Services Murad Saeed and other PTI leaders, was heading toward a public gathering in connection with the upcoming elections in Azad Kashmir when some people threw stones at them near Jhelum Valley.

“We decided not to respond to PML-N workers’ attempts to sabotage the general election process, as the whole democratic world was witnessing elections in the liberated territory,” he added.

He said he had informed the public before launching the election campaign in AJK that the PMLN would promote Indian narrative in its public meeting addresses, adding its vice-president Maryam Nawaz proved that by not uttering a single word against Modi’s tyranny and cruel measures in Indian Illegally Occupied Jammu and Kashmir (IIOJK).

Gandapur said the PTI would form a government after making a landslide victory in the general elections to the Legislative Assembly of Azad Jammu and Kashmir.

He said the federal government had launched a project to build underground bunkers in 57 villages for the safety of local residents living near the Line of Control (LoC).

Gandapur said his government had provided Sehat Insaf Cards to all residents of Azad Jammu and Kashmir, while the scope of Ehsaas Cash Emergency Programme was being extended across the valley to help the poor and needy people.

The minister said Prime Minister Imran Khan had internationalised the Kashmir cause by highlighting it at every international fora.

Minister for Communications Murad Saeed expressed the confidence that the PTI would sweep the AJK elections, being held on Sunday (today), due to the agenda of massive development and the public welfare schemes it had planned to execute after coming to power.

“I thank hospitable and dignified people of AJK, who extended great love and affection for the ambassador of Kashmir Prime Minister Imran Khan and his party during the election campaign, and actively participated in the PTI’s campaign,” he said while addressing the news conference.

The minister said the survey reports also indicated that the PTI would succeed in the elections with a heavy majority and start a new era of development, prosperity and poverty alleviation there.

He said Maryam Safdar and Bilawal Zardari were just working to protect the corruption of their fathers as they had nothing to do with the development of AJK and the welfare of its people.

The minister said Prime Minister Imran Khan had effectively highlighted the Kashmir cause at all international fora and the miseries of innocent people of IIOJK at the hands of brutal Indian forces.

During the news conference, the minister played video clips of Modi’s visit to Nawaz Sharif’s residence in Lahore to attend a marriage ceremony, interview of Pakistan’s former ambassador to India who revealed that the Sharif family repeatedly asked for issuance of business visas to Indian nationals, and interview of a former foreign office secretary who confessed to receiving directives to not talk against India.

Murad condemned the language used against Pakistan by absconding Nawaz Sharif and his meeting with Hamdullah Mohib in London the other day, the biggest ally of Indian intelligence agency RAW in Afghanistan.