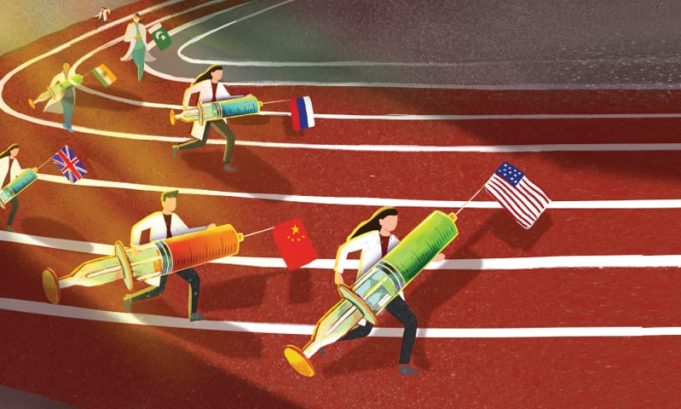 “Khatra abhi tala hai, lekin poori tarha se khatam nahin hua [The danger has subsided, but hasn’t fully ended yet],” warned the recorded message Pakistanis would hear when calling their loved ones on the phone. A fourth wave could be around the corner, said Chief of the National Command and Operation Centre (NCOC) Asad Umar, urging people to encourage those over 50 years of age to get vaccinated.

But despite the warnings, the increasing threat of the Delta variant, first detected in India, and international travel restrictions on Pakistanis, blatant violations of SOPs (standard operating procedures) continued. Soon enough, Sindh announced its decision to reimpose restrictions.

But while it is easy to cast blame widely, the truth is that Pakistan faces many challenges in its battle against the coronavirus. As the world races towards some semblance of normalcy, countries such as Pakistan, chasing vaccine supplies in a tight global market and battling high vaccine hesitancy, are bound to lag behind.

Globally, over 3.5 billion Covid-19 vaccine doses have now been administered. Over 30 million people are getting jabbed each day, including children as young as 12 years, with certain vaccines now approved for those as young as three.

Even as the threat from new variants of the coronavirus and a fourth wave of infections looms and Pakistan belatedly ramps up its vaccinations, it must also contend with the political economy of vaccines — where issues of their production, supply and distribution are coming up against global politics and an increasingly unequal world

But this global success story is not without its caveats. Global demand for vaccines continues to outstrip supply and distribution remains highly inequitable — countries with the highest incomes are getting vaccinated more than 30 times faster than those with the lowest. And ,as the richer countries continue to regain some semblance of normal life, poorer countries continue to struggle and find themselves disconnected (often quite literally) from the rest of the world.

It’s not all bad news. In fact, there has been quite a lot of good news. Having vaccines is a triumph of science and human endeavour. Consider:

A year ago many medical professionals, World Health Organisation (WHO) specialists and global policymakers were sceptical about the world ever finding an effective vaccine. Even optimists were convinced that the world was on the brink of doom since, historically, the average time for any vaccine to make it to market was seven years. Covid-19 was being compared with the 20th century Spanish flu, when over 50 million people perished. World GDP was also projected to shrink for several years.

But today, we have over 15 authorised vaccines and dozens more in the pipeline. While efficacy rates range from 50-95 percent, depending on the type of vaccine, all have been shown to prevent serious illness and death. This remains true for all known virus variants including the Delta and all other known strains.

Covid-19 rates, hospitalisations and deaths have generally flattened or declined where vaccination rates are highest. While instances of new outbreaks remain even where the majority of the population is inoculated, the evidence is clear. New cases are concentrated amongst the unvaccinated.

Data from the recent outbreak in the Seychelles, for example, shows that over 65 percent of those infected were unvaccinated. In the UK, where over 68 percent of adults have received at least one dose, hospitalisations continue to decline, even as the Delta variant drives an uptick in cases.

Infectious disease experts believe that the virus will not cause the disease we have come to recognise over the past year, because so many will be protected through vaccination or previous infection, and the disease will, eventually, become more like the common flu.

Singapore is moving toward a policy of not reporting daily Covid-19 cases to restore a sense of normalcy, as vaccination protects the majority of its population. Germany has called for a review of how the virus has to be considered from a social and public health perspective. German Health Minister Jens Spahn observed that, “because the at-risk groups are vaccinated, a high incidence doesn’t automatically mean an equally high burden” on the health system.

We also know that the vaccines are safe. Since late 2020, the US has administered over 330 million doses. Over this period, there have been less than 5,000 reports of deaths (0.0015 percent) among those who received a Covid-19 vaccine. The American Centres for Disease Control (CDC) and the Food and Drug Administration (FDA) physicians review each case report of death. A review of available clinical information has not established a causal link to vaccines.

The evidence belies the recent brouhaha about blood clots. The odds of these events occurring are less than one in one million. For perspective, the chances of being struck by lightning are higher (one in 0.75 million).

However, in the midst of this historic success of science and human endeavour, there are now the makings of a historic failure of markets, morality and global collective action.

WHAT ABOUT THE POOR COUNTRIES?

As production ramps up, rich countries are faced with large surpluses of vaccines in the second half of 2021. The Brookings Institute estimates that the US will have a surplus of over a billion doses by the end of the year. This is so even in a scenario where every citizen receives a booster jab. The Duke Global Health Innovation Centre estimates that the European Union (EU) will have over 500 million excess doses, and the UK and Canada, 165 million and 156 million respectively.

However, while more than half of all high and upper-middle income countries have administered enough doses to fully vaccinate at least 20 percent of their populations, only three out of 79 low and lower-middle income countries, as designated by the World Bank, have reached the same level of vaccination. The director of the WHO describes this inequality in vaccine distribution as “a catastrophic moral failure.”

Moralities aside, there are also serious economic and practical considerations. The only path to normalcy is vaccination. Unless the world plans for this and fast, we will have to go through periods of lockdowns, slowdowns and other forms of restricted activity, with adverse impacts on employment and incomes in various countries.

In a globally interconnected and dependent world, and with a virus that mutates in spaces where it is allowed to spread, no one is safe until everyone is safe. The International Chamber of Commerce estimates that vaccine inequality at today’s scale could cost the world around 9.2 trillion dollars in economic losses, in the worst-case scenario, with rich countries suffering half of that blow.