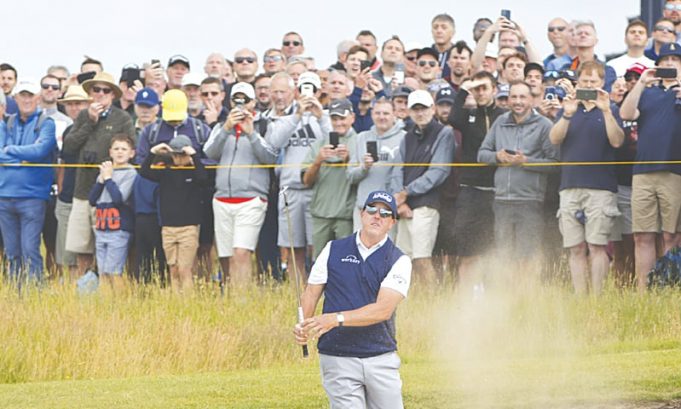 Collin Morikawa showed no sign of inexperience when surging into the lead on his British Open debut at nine under par after a second round score of 64 on Friday.

The American is making his first appearance at the Open Championship and played for the first time on British soil last week at the Scottish Open where he finished in a tie for 71st.

“I wouldn’t be here through these two rounds if I hadn’t played last week at the Scottish,” said Morikawa.

“It was a huge learning opportunity. I went into last week wanting to win but I came out of it learning a lot more and that thankfully helped for this week.”

The 24-year-old has already shown an ability to raise his game for the big occasion during his short career and he did so again with a round of six under at Royal St. George’s.

In just seven previous major appearances, Morikawa has finished in the top-10 three times, including victory at last year’s US PGA championship.

The last debutant to win on his Open debut was Ben Curtis in 2003, also at Royal St George’s.

But while Curtis was a rank outsider who never matched the heights of his golden week in Sandwich, Morikawa is already ranked fourth in the world.

Starting out on Friday at three under, Morikawa picked up two shots in the first seven holes before hitting his stride around the turn.

Another birdie putt on the 18th hit the lip of the cup and stayed out, but Morikawa was still three shots in front of overnight leader Louis Oosthuizen, who will begin his second round later at six under.

“I feel pretty good. Towards the end of the round we stopped hitting fairways and making a few birdies, but overall, it’s a very good 64 and I will take it,” said Morikawa, whose 131-total for 36 holes has only been bettered twice in Open history.

“It was great conditions for scoring and I made a lot of fairways early on. Bit more of a grind the last few holes.”

A fast start from Jordan Spieth cut Morikawa’s advantage to two shots as the 2017 Open champion moved to seven under with two birdies on the opening two holes.

South African Daniel van Tonder (66), Argentina’s Emiliano Grillo (64) and German Marcel Siem (67) are in the clubhouse on six under.

Cameron Smith and English duo Andy Sullivan and Danny Willett moved to five under on a perfect day for low scores under blue skies and a soft wind.

Northern Ireland’s Rory McIlroy, seeking a first major since 2014, received a huge ovation from the galleries as he strode to the first tee hoping to start climbing the leaderboard after his battling level-par 70 on Thursday.

But bogey fives on the first and second holes stopped him in his tracks before birdies on the fourth and ninth left him on level-par but with work to do to make the cut.

Phil Mickelson will miss the weekend after his nightmare 10 over par round of 80 on Thursday.

The US PGA champion made a better fist of his second round but finished two over for the day.

admin - September 24, 2021 0
Twelve years prior, Little Boots duetted with Abba's Benny Andersson on a scene of Jonathan Ross' talk show. "I was in the green room with...

admin - January 18, 2023 0
Democrats had previously removed Taylor Greene and Gosar from their positions of power because they saw them for what they are: dangerous weirdos whose...