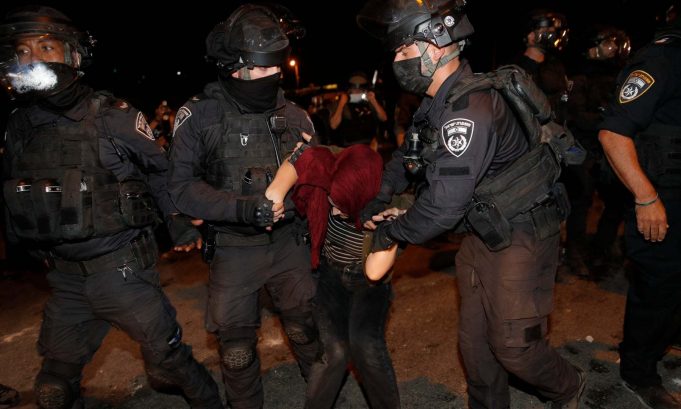 Tensions ran high Sunday in annexed east Jerusalem after hundreds of Palestinians were wounded in a weekend of clashes between protesters and Israeli security forces, sparking global concern that the unrest could spread further.

The violence around Jerusalem’s revered Al-Aqsa mosque compound and the Old City, mostly at night, is the worst since 2017, fuelled by a years-long bid by Jewish settlers to take over Palestinian homes in east Jerusalem.

Some 121 Palestinians were wounded in Saturday’s overnight clashes, many hit by rubber bullets and stun grenades, the Palestinian Red Crescent said in an updated toll. Israeli police said 17 of its officers were wounded.

The previous night more than 220 people, again mostly Palestinians, were hurt after Israeli police stormed Al-Aqsa after they said Palestinians threw rocks and fireworks at officers.

Header image: Israeli police officers detain a Palestinian demonstrator during a protest against the planned evictions of Palestinian families in the Sheikh Jarrah neighbourhood of east Jerusalem, Saturday, May 8. — AP

Pakistanis rally in major cities against Israeli attacks on Gaza

UAE and Israel press ahead with ties after Gaza ceasefire