China’s Xi Jinping, Germany’s Angela Merkel and France’s Emmanuel Macron were talking ahead of the COP26 in Glasgow and the G20 in Rome. Air links between the countries could soon be restored.

Chinese President Xi Jinping spoke of improving relations with Europe in a video call with German and French leaders on Monday.

The conversation took place at a time when relations have been strained by China′s increasingly authoritarian approach to Hong Kong and the Uyghur minority.

One year since Beijing imposed security law on HK

What did the three leaders talk about?

France′s Elysee palace said the talks were held to discuss the leaders′ different positions ahead of the COP26 climate summit in Glasgow and the G20 summit in Rome later this year.

Xi said he wanted better cooperation between Europe and China while Macron and Merkel spoke to Xi about the importance of halting Chinese government support for coal power stations.

The three national leaders spoke of working towards a fairer environment for both Chinese companies in Europe and European companies in China.

Amid ongoing negotiations in Vienna, the possibility of reviving the Iran nuclear deal was also discussed with the French spokesperson saying it should be done “as soon as possible.” China, Germany and France remain signatories to the accord.

The French statement said that “air links should also resume as soon as possible while respecting the principle of reciprocity” after the global pandemic.

What was said on human rights?

Human rights groups have reported that the Chinese authorities have imprisoned up to 1 million Uyghurs and other mostly Muslim minorities. The groups say the prisoners have then been forced to work in labor camps, with less common allegations of forced sterilization for some women. 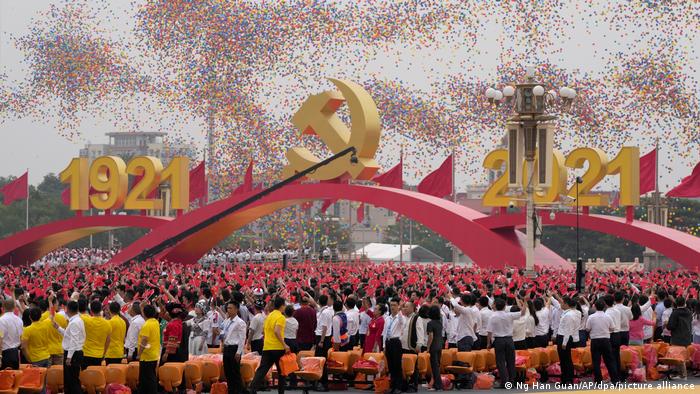 The meeting came after the Chinese Communist Party’s centenary celebrations when Xi said the economic superpower was on an “irreversible” pathway from colonial humiliation.