Iranian President-elect Ebrahim Raisi on Monday ruled out a meeting with President Joe Biden and in response to a tv channel called on the United States to return to the nuclear deal, in his first international news conference since he won Iran’s election over the weekend.

Raisi said he would not meet with Biden, even if both sides agreed on terms to revive the 2015 nuclear deal, under which Iran agreed to stop uranium enrichment in return for the lifting of crippling US sanctions.
On Saturday, the hardline judiciary chief and staunch Western critic was declared the winner of a historically uncompetitive election in Iran. All of Raisi’s serious rivals were barred from the race and overall voter turnout was 48.8%, the lowest figure since the establishment of the Islamic Republic in 1979.
He will become the country’s eighth president when he takes over from Hassan Rouhani in August. Iran is currently indirectly negotiating with the US in Vienna over how to salvage the nuclear agreement, which the Trump administration unilaterally withdrew from in 2018.
Responding to a question from a Tv channel at Monday’s news conference in Tehran, the President-elect accused the US and European Union of violating the deal, and called on Biden to lift all sanctions before adding that the country’s ballistic missile program was “not up for negotiation.” 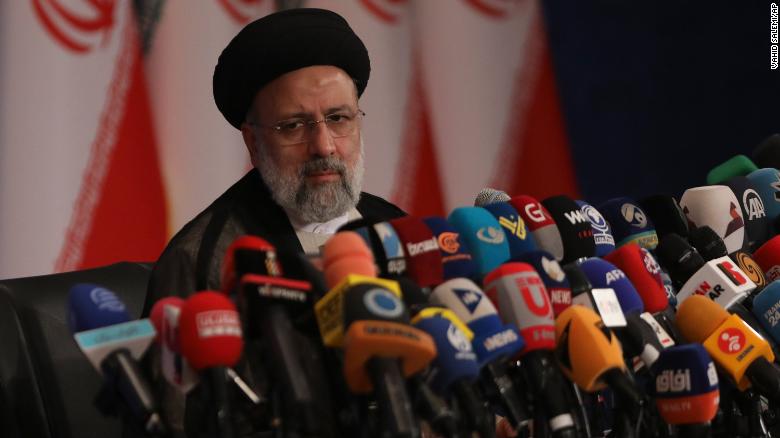 Iran’s new President-elect Ebrahim Raisi speaks during a news conference in Tehran, Iran, on Monday.
“My serious proposal to the United States government is for them to return [to the agreement] in an expedited manner … in doing so they will prove their sincerity,” Raisi said. “The people of Iran do not have good memories of the JCPOA,” Raisi added, referring to the formal name of the nuclear deal.
“The Americans trampled on the JCPOA and the Europeans failed to live up to their commitment. I reiterate to the US that you were committed to lifting the sanctions — come back and live up to your commitments,” he said in his opening statement.
The new Iranian leader said that the maximum pressure sanctions campaign on the country, first instituted by the Trump administration, “was not successful.”
“Up until today, maximum pressure was not successful on our people, they [the US] must change their minds, and come back to reason. Our people have shown they can withstand the pressure,” he said.
Raisi welcomed diplomacy and dialogue, but said that Iran’s foreign policy would not be limited to the 2015 nuclear deal.
Adviser to Iran’s Speaker of Parliament: US has constantly lost opportunities 01:25 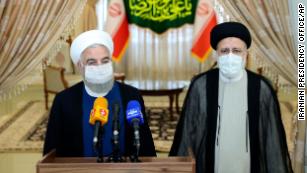 Trump dashed dreams of reform in Iran. The country’s new hardline president is living proof
Trump abandoned the nuclear deal in 2018 and reimposed crippling sanctions on Iran. In response, Tehran resumed some nuclear activities. In April, the country announced its intention to enrich uranium up to 60% purity, pushing the country closer to reaching the 90% enrichment level that is considered weapons-grade. Iran has repeatedly denied it plans to assemble nuclear weapons.
Raisi also said he hoped his tenure would see a restoration of ties with Iran’s regional foe, Saudi Arabia. The President-elect added that he would place “no barriers” on efforts to reopen embassies in both countries.
In May, Iran’s foreign ministry confirmed that direct talks had begun between top Saudi and Iranian officials, after a five-year diplomatic freeze and decades of strained relations.
Riyadh and Tehran severed ties in 2016 after Saudi Arabia executed a top Shia cleric, Nimr al-Nimr. Hours later, Iranian mobs stormed the Saudi embassy in Tehran and set it ablaze.
Raisi also called on Saudi Arabia to halt the hostilities in Yemen. “Stability must return so that the people of Yemen can decide for themselves … whom they wish to give those management responsibilities to. And again we reiterate the most immediate cessation of attacks by the Saudis against Yemen,” he said.
Raisi is the first elected Iranian leader who is under US sanctions. The Treasury Department detailed his brutal past in 2019, citing a United Nations report that found that Iran’s judiciary approved the execution of at least nine children in 2018 and 2019. Multiple rights groups have also specifically condemned his alleged involvement with a four-person “death panel” in 1988 that oversaw the mass execution of up to 5,000 political prisoners.
Raisi has never commented on the death panel allegations. When asked about the executions during Monday’s news conference, he instead defended his track record as a prosecutor and judge.
“I’ve always defended the rights of the people. Human rights have been the most foundational base upon which I worked,” the ultra-conservative Muslim scholar said.
Raisi added that he was “proud” that throughout his career he has defended human rights and said that he would continue to do so as Iran’s next president.
Amnesty International demanded on Saturday that he be investigated for alleged crimes against humanity over the mass executions.