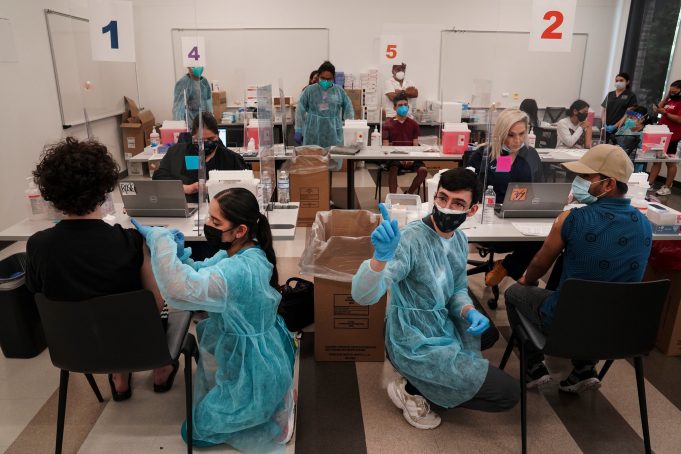 The Rio Grande Valley accounts for nearly 10 percent of the state’s coronavirus deaths. But inoculation rates are high, and deaths and new cases have plummeted.

While officials across the United States have offered free beer, concert tickets and millions of dollars in lottery winnings to encourage vaccinations, residents of the Rio Grande Valley in South Texas have needed little prodding. Exposure to death and disease has been enough incentive.

The four-county region accounts for nearly 10 percent of Texas’ approximately 52,000 deaths from the coronavirus. But today, deaths are significantly down, as are case numbers, and vaccination rates are higher than both the state and national averages.

In one county, about 70 percent of residents 12 and older are fully vaccinated, according to state figures and a vaccine tracker maintained by The New York Times.

“I think pretty much everyone in the region knew someone who died from Covid,” said Dr. Michael R. Dobbs, the vice dean of clinical affairs for the University of Texas Rio Grande Valley, which operates the region’s only medical school. “So people wanted the vaccine.”

At the height of the region’s coronavirus surge last summer, hospitals were overloaded with patients, many of whom waited hours to be seen, and funeral homes were so busy that many stored bodies in large refrigerators for weeks.

On its worst day, Hidalgo County, the most populous county in the Valley, reported the deaths of more than 60 people, reaching a coronavirus death rate of 5 percent, more than double the 2 percent national average.

So when vaccines became available, people scrambled to line up. They flocked to area schools, fire stations and flea markets. They slept in parking lots, jammed phone lines and showed up without appointments.

Elsewhere in the United States, high death tolls have not necessarily translated to high vaccination rates.

In the Rio Grande Valley, vaccines are part of the region’s fabric, said Dr. Emilie Prot, a regional medical director with the state department of health. Parents understand their children must be vaccinated against diseases like measles and polio before starting school, and that sentiment often translates to adults.

“In the Hispanic and Mexican culture, it’s always, ‘All right, you have to get your shots to go to school,’” she said. “It’s part of the culture that they need to get vaccinated.”

Recent polling supports this notion: According to an NPR/PBS NewsHour/Marist survey of 1,227 adults in early March, 63 percent of Latinos who participated said they either planned to get the vaccine or already had received it. (But the number of those who expressed hesitancy — 37 percent — was slightly higher than Black and white respondents.)

While the United States as a whole is not on pace to meet President Biden’s goal of at least partly vaccinating 70 percent of adults by July 4, the Rio Grande Valley is getting close to that threshold.

The vaccination numbers in the Rio Grande Valley are particularly striking at a time when rates continue to struggle in Southern U.S. states, and in Republican-led states, where mistrust in the government is more prevalent.