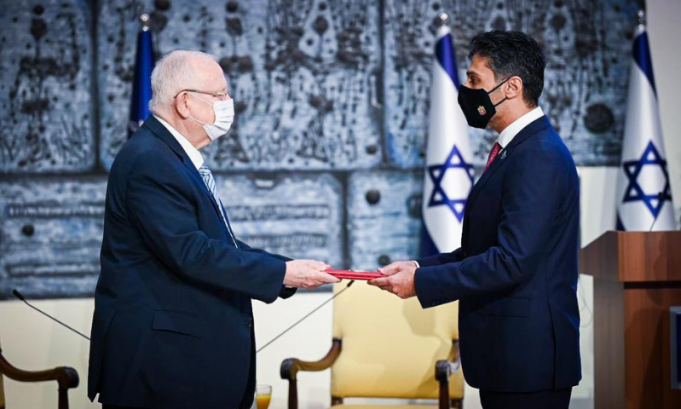 JERUSALEM: Israel’s president on Monday formally received the first-ever ambassador from the United Arab Emirates to the Jewish state, following last year’s agreement between the countries to normalize ties.

Mohamed Al Khaja, the UAE envoy, arrived in Israel on Monday, delivered his credentials to Israeli President Reuven Rivlin at a ceremony in Jerusalem.

After greeting Khaja in Arabic, Rivlin said “The entire Israeli people welcome you with joy.

“This will be your most important mission — to welcome the hands reaching out to you… treaties are signed by leaders, but real, sustained peace is made between peoples, face to face,” the president said.

khaja said he would “work tirelessly to strengthen the political ties between our two countries, in the service of our peoples and regional stability.”

The UAE was the first country to agree to establish full diplomatic relations with the Jewish state under the Abraham Accords, a pact brokered by former US president Donald Trump.

The agreement made the UAE only the third majority Arab nation to form official ties with Israel, following Egypt in 1979 and Jordan in 1994.

Bahrain, Morocco and Sudan have subsequently joined the Abraham Accords.

The Palestinians have condemned the normalisation deals with Israel, describing them as treason.

Hamas, which controls the coastal Palestinian enclave of Gaza, on Monday slammed Khaja’s arrival in Israel, calling it a “national sin” on the part of the United Arab Emirates.

“Normalisation will always encourage the Israeli occupation to deny our Palestinian people’s rights and to continue its crimes against all segments of the Arab world,” it said in a statement.

Pakistanis rally in major cities against Israeli attacks on Gaza