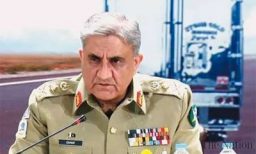 Head of Army Staff (COAS) General Qamar Javed Bajwa said Pakistan committed to peace and stability and the nation focuses on harmony and strength and that it has been having its impact in such manner, the Inter-Service’s Public relations said Monday.

The remarks came during the military boss’ visit to the soldiers occupied in combination activities along the Pak-Afghan Border in the Dawatoi segment, North Waziristan, the ISPR said.

“We need to stay watchful and unfaltering to impede threatening endeavors to make bedlam and opposite the additions of Operation Radd-Ul-Fasaad,” it said.

Collaborating with the soldiers, the military boss valued their “exceptional operational execution and high condition of resolve”.

COAS said that Pakistan focused on harmony and dependability and that nation has been having influence by setting fringe security.

“Late union tasks along Pak-Afghan Border compelling territory mastery of some unavailable pockets of land which were by and large inconsistently utilized by fear mongers as safehouses to target nearby masses and security contraption in the back regions,” the announcement included.

As indicated by the ISPR, in excess of 90 IEDs over the span of tasks.

“Fencing of this challenging stretch of outskirt territory will start in a matter of seconds.

Security powers have dynamic control of the final stretch of the worldwide outskirt now in North Waziristan,” it included.

These measures, as per the announcement, will additionally improve the security of people in general,

in both North and South Waziristan, and fortify checks over the illicit intersection of Pak Afghan Border.

Then, valuing the ancestral individuals for their resolute help in battling fear-mongering,

the military boss said that harmony has generally come back to the district, notwithstanding,

it will take aggregate endeavors of the nearby populace, common organization, and LEAs to hold the well-deserved regularity.

3 days of rains in Pakistan kill 90, disrupt life in Karachi

Political options run out for PM Oli in Nepal cliff-hanger