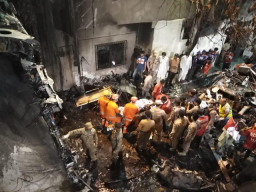 KARACHI: The help and salvage work at the site of plane accident close to Karachi air terminal proceeds and 97 bodies have been recouped from the garbage as of not long ago, said Director General Inter-Services Public Relations (DG-ISPR) Major General Babar Iftikhar on Saturday.

Refreshing about the present circumstance of the alleviation and salvage activity through his official Twitter handle, DG ISPR said the two overcomers of the accident are under treatment in the medical clinic.

25 houses that were harmed in the plane accident have been cleared and the affectees have been moved to another area, Pakistan armed force’s representative said.

A Pakistan International Airlines (PIA) airplane with in excess of 90 travelers and eight group individuals on board slammed in a local location close to Jinnah International Airport on Friday.

The Civil Aviation Authority has additionally settled a helpline which will stay practical nonstop for keeping refreshed the relatives and family members of the PK-8303 travelers.