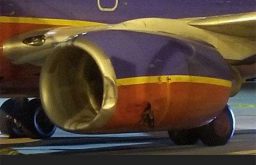 A Southwest Airlines jetliner hit and killed somebody as it arrived at Austin’s principle air terminal Thursday night, specialists said.

The Federal Aviation Administration said the pilot of Flight 1392 announced seeing an individual on the runway not long after the Boeing 737 contacted down at Austin-Bergstrom International Airport at 8:12 p.m. nearby time.

The bearer said the pilot moved to attempt to maintain a strategic distance from the individual, whose personality wasn’t quickly discharged.

The driver of an air terminal tasks vehicle hence announced finding the individual on the runway. Austin-Travis County Emergency Medical Services said its work force articulated the individual, a grown-up, dead at the scene.

The plane maneuvered to a door, everyone got off and nobody on board was harmed, Southwest said. The plane was conveying 53 travelers and five team individuals, reports CBS News reporter Kris Van Cleave. The airplane had taken off from Dallas’ Love Field.

CBS News acquired a photograph of the harm to plane. It demonstrates harm to one side motor cowling, remembering a sizable scratch for the cowling’s driving edge. A cowling is the outside lodging of a motor.

The runway where it happened was shut as specialists explored yet a subsequent runway was kept open so the air terminal could continue working, reports CBS Austin associate KEYE-TV.

Austin police told the station the dead individual wasn’t dressed as an air terminal specialist and didn’t have any distinguishing proof.

The FAA said it would help Austin police in the examination of the episode.