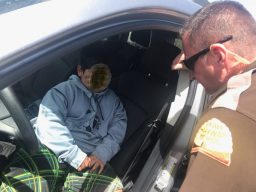 Police in Utah pulled over a 5-year-old driver who said he was going to California to purchase a Lamborghini.

The kid by one way or another advanced onto the interstate in his folks’ vehicle Monday and was intending to get himself an Italian extravagance sports vehicle, Utah Highway Patrol said in an announcement on Twitter.

“He may have been short on the buy sum, as he just had $3 dollars in his wallet,” the announcement said.

Trooper Rick Morgan pulled the kid over after he saw the vehicle turning so seriously on Interstate 15 in Odgen, Utah, that he thought the driver was debilitated or required clinical consideration. Morgan told the Associated Press the kid didn’t react to his lights yet pulled over when he hit his alarm.

“I moved toward the vehicle and I was hoping to discover someone who required an emergency vehicle or paramedics,” Morgan said.

In any case, when the window descended, Morgan said it was quite evident that it was “a very underaged driver who was in the driver’s seat.”

The kid was perched as eager and anxious as can be to arrive at the brake pedal, the trooper said.

Run camera film of the traffic stop shows Morgan pulling over the SUV and scrutinizing the driver.

“How old right? You’re 5 years of age?” Morgan says in the video. “Stunning, OK. Where did you figure out how to drive a vehicle?”

The kid’s folks were reached and they took care of their child and the vehicle.

Nobody was harmed and no property was accepted to be harmed, open data official Nick Street told KSL-TV, however the Weber County lawyer’s office will chose whether or not to document charges against the kid’s folks.