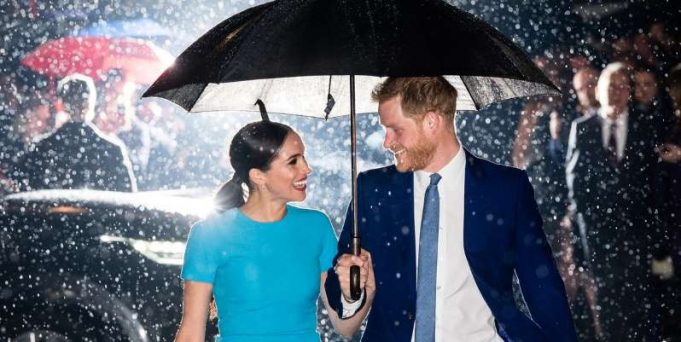 Royal photographer Samir Hussein revealed that Prince Harry and Meghan Markle are fans of the gorgeous, rainy snapshot he took of them.

Hussein’s photo showcased the Duke and Duchess of Sussex beaming under an umbrella at one of their last public engagements as working royals in March.

“The picture that I took of Harry and Meghan in the rain recently, I’ve never had a reaction to a picture like that one,” said Hussein.
Thanks to royal family photographer Samir Hussein, Prince Harry and Meghan Markle may have a new favorite photo.

In a new interview with Us Weekly, Hussein shares that the Duke and Duchess of Sussex were “really happy” with the now-iconic snapshot the photographer captured of the royal couple back in March. The photo in question was from the 2020 Endeavour Fund Awards in London—one of the last public appearances from the couple as active working royals— where Hussein captured the pair beaming at each other whilst under an umbrella as they arrived to the event.

“The picture that I took of Harry and Meghan in the rain recently, I’ve never had a reaction to a picture like that one. In terms of the reaction I’ve had from people, that’s got to be the most iconic from that point of view,” Hussein told Us Weekly. “I spoke to some of their team and they were really happy about it and talking about it.”

The photographer—who had spent time photographing the couple all around the world over the past few years, including locations such as Australia, Fiji and Africa—expressed how he’ll miss being able to capture images of the pair due to their recent relocation to Los Angeles this spring.