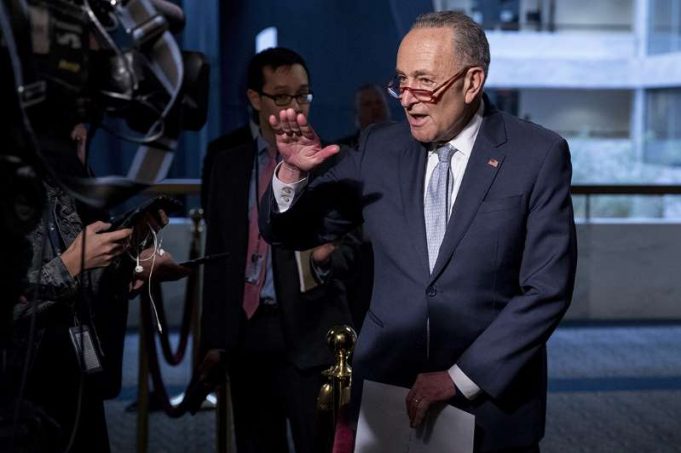 Senate Minority Leader Chuck Schumer is wanting to push for an arrangement in the following coronavirus bundle that would prevent President Donald Trump from putting his name on any extra upgrade checks.

The supposed “No PR Act” would disallow the utilization of government dollars toward any material that advances Trump or Vice President Mike Pence’s names or marks.

“President Trump tragically seems to consider the to be as simply one more chance to advance his own political advantages,” the New York Democrat said in an announcement. “The No PR Act stops the president’s abuse of citizen cash for limited time material that lone advantages his re-appointment crusade.”

Schumer’s proposition comes after the Treasury Department requested that Trump’s name show up on a great many upgrade looks at sent by the Internal Revenue Service, following the entry of a $2 trillion salvage bundle in March. Pundits said the mark appeared to be intended to make it show up as though the cash was expected exclusively to the helpfulness of the president.

“Postponing the arrival of boost checks so his mark could be included is an exercise in futility and cash,” Schumer included.

The Senate minority pioneer’s arrangement is a piece of a more extensive Democratic exertion to lead oversight over the Trump organization in the midst of the pandemic. Walk’s financial salvage bundle incorporated the making of a commission to regulate the organization’s treatment of a $500 billion store for troubled ventures.

In any case, the status of the following coronavirus spending bundle stays dubious. While Speaker Nancy Pelosi (D-Calif.) disclosed to her council a week ago that a “CARES 2 ” bundle is about done, Senate Majority Leader Mitch McConnell (R-Ky.) is cautioning that the Senate will move “carefully” on the following period of help.

The Senate is booked to profit to Washington for May 4.

A week ago, Congress passed a $484 billion coronavirus help bill, giving $380 billion to independent companies, $75 billion for emergency clinics and $25 billion for testing.