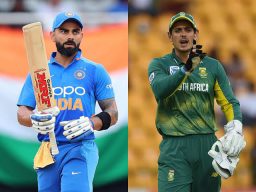 Under 24 hours after it said the rest of the home ODI arrangement among India and South Africa would be played away from public scrutiny due to the coronavirus pandemic, the BCCI on Friday chose to cancel the matches in Lucknow (March 15) and Kolkata (March 18) for the present. A BCCI explanation said both they and CSA had chosen to “reschedule” the arrangement and that South Africa would visit India sometime in the not too distant future to play three ODIs, with an updated plan.

“The Board of Control for Cricket in India (BCCI) alongside Cricket South Africa (CSA) on Friday declared to reschedule the continuous ODI arrangement taking into account the Novel Corona Virus (COVID-19) episode,” the BCCI said in a media discharge on Friday. “Cricket South Africa will visit India sometime in the not too distant future to play 3 One-day Internationals. The BCCI-CSA will mutually work out the overhauled plan.”

The announcement implied that the two groups would play a new arrangement of three ODIs despite the fact that in fact the first ODI had been finished right now, it was a waste of time without a ball being bowled in Dharamsala.

Rescheduling the continuous arrangement was the second noteworthy choice about Indian cricket that the BCCI made on Friday, having prior conceded the IPL until April 15.

The rescheduling of the ODI arrangement is probably going to have come as an astonishment to even the Indian and South African groups, considering the BCCI had conveyed the training plan for the two groups for Saturday not exactly an hour prior to the board’s choice. According to the preparation plan, India were to have a discretionary instructional course between 10.00 am to 1.00 pm toward the beginning of the day, with South Africa’s meeting from 2.00 pm toward the evening.

In a later discharge, CSA said CEO Jacques Faul and break executive of cricket Graeme Smith had both by and by been in contact with the BCCI and “offered their thanks for their comprehension and participation in showing up at this truly dependable choice”. Faul included that CSA was additionally doing a hazard evaluation of its progressing local season.

“Our view is that this choice is both important and a safety measure that must be taken in light of a legitimate concern for cricket and the maintainability of the game,” Faul said. “We are checking the circumstance with the infection and are in steady conference with clinical and virology specialists. We will apply our psyches to the contribution of specialists and act in a manner that mirrors our obligation of thinking about our players. We are as of now doing a full hazard appraisal because of the infection on our tasks, including the momentum household season.”