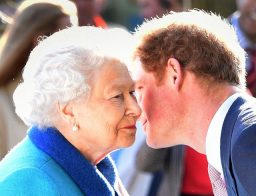 A tremendous news is being revealed that, ‘’The 35 year old Harry and his wife Meghan, are bidding farewell to royal life and going to start a new life in Canada with their son Archie who is nine years old, at the end of this month.’’

The queen seems ‘’very upset’’ by Harry and Meghan’s decision to leave. Therefore a meeting was arranged between the Queen and his grandson on Sunday (01.03.20)

Harry held a four hour meeting with his grandmother Queen Elizabeth, during which she told him that door of royal family is always open for him and his wife.

The Queen Elizabeth II, The 93 years old monarch, is believed to have ended the talk by saying; ‘’you be always loved and will always be welcomed back’’.

Harry’s meeting with his grandmother took place in Windsor Castle, where he and the Queen had lunch and tea and they discussed further plans regarding future of Harry.

A royal person told The Sun newspaper; ‘’during this meeting Harry and Queen discussed in detail upon the matter and had a very friendly talk as this was a very ideal time and situation for both of them.’’ ‘‘although the news of their step down from royal family is a stressful news for all the concerned people.’’

RESPONSE OF BUCKINGHAM PALACE TO THE STATEMENT

The Buckingham Palace responded shortly after the announcement and said, ‘’the conversations with the Duke and Duchess of Sussex have just started now. We appreciate their desire to take a different step, but this is a complicated step and will take time to settle.’’

‘The Queen and Harry had a chance on Sunday for a meeting together. The topic was discussed in a friendly and relaxed environment and the Queen got agreed to Harry’s decision.’’

The consequences of the talk are very positive and hopefully the chat cleared the air and the way forward is looking more positive.’’

Queen Elizabeth II insisted again and again to her grandson Prince Harry that he will be always welcomed back into the royal life.

Some internal news revealed that: ‘’although Queen is upset with their decision, she wishes to see more of Archie and so are the feelings of Prince Charlie, but they are satisfied with the decision of Harry and Meghan’’.

Meghan and Harry will leave the royal life forever on 31 March officially.

Queen has allowed the couple to stay in the Frogmore Cottage. Moreover they will also pay the rent too as they are no more member of the royal family.

Harry and Meghan to no longer use their titles

After been step down from the royal family the Buckingham palace said that the titles like ‘his or her highness’ not to be used with the names of Harry and Meghan.

No security funding by Canadian Government

“After their official date of stepdown that is 31st March 2020 prince Harry and Meghan will not be provided with security’’, statement given by Canadian government, Minister of public safety.