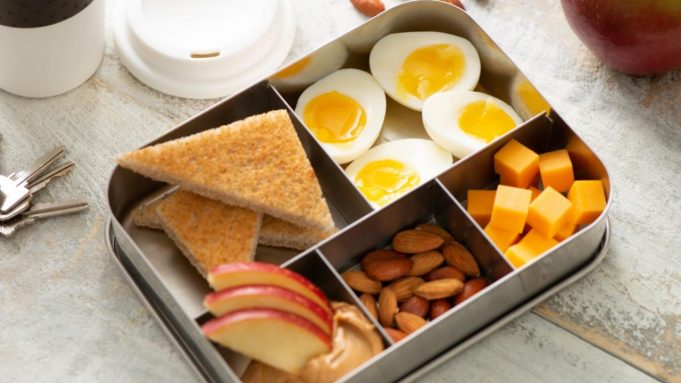 According to researchers, the ability of the body to lose weight depends a lot on the breakfast.

“Ability of loosing weight depends on how much calories are consumed by the body”, discovered by a team from Vanderbit University in the US.

Researchers did an experiment and monitored the metabolism of young and old people. For this they arranged a whole room respiratory chamber and had two seprate 56 hour sessions, in which the lunch was given at 12:30pm and dinner at 5:45pm

The result showed that, the timing of the third meal had a great impact on the amount of fat burned.

Participants who had breakfast burned more fat than those who skipped it and had it late at night as a snack.

“Having a daily fast between breakfast and evening meal helps to maintain meal burn fat efficiently. Because our eating habits have a strong implications on our fat burning due to the body clock which burns fat when we are sleep,” said by Kevin Kelly, Owen McGuinness, and Carl Johnson.

A whole wheat bread toast with cream cheese spread and tooped with 56 gram of smoked salmon and onions is rich in calcium. According to international journal of obesity “calcium in dairy contributes to burning fat”

Study of journal Appetite says that “vitamins A and K, spinach helps to cut cravings.” Two eggs with two cups of green fried in olive oil is a fat burning breakfast.

Chocolate cherry waffles breakfast not only looses weight but is also a cure of heart disease and type 2 diabetes.

Tofu scramble served with whole wheat bread and cheese is a good combination of soy and protein rich diet.

According to the university of Michigan health system, “pigments in dried tart cherry reduce weight and fat.” Two tablespoons of tart cherries withered on oats in a half cup of sugarless almond milk.

The ingredients of pistachio rice pudding are a half cup of brown rice with topping of 15 pistachios cooked in fat free milk.

Barley with walnuts and mapple syrup

According to a research, walnuts have polyunsaturated fats that not only reduce fat but are also good for heart. This dish is cooked by mixing three fourth cup of barley with half cup of fat free milk and 10 walnuts.

Mix one fourth cup of ricotta with two tablespoons of honey,  one navel orange and kne tablespoon of pomegranate seeds and spread it over a slice of whole wheat toast. A report issued by Women’s health say that “pomegranate aid in weight loss and fat burn.”

Breakfast of burritos with black beans keeps your stomach full for long.

A report issued by Health magazine says that avocados help reduce belly fat. So these Guacamole turkey sandwiches are a healthy alternative item for breakfast.

Ingredients of banana smoothie are 112 gram of plain low fat yogurt, cup of skim milk or almond milk (23 calories less) and a medium banana. Vitamin B6 aids in weight loss and protects against type 2 diabetes.

Make a base of wheat germ and flax seeds in a dish, than make a layer of grapefruit and 226 gram of yogurt  and than top it with honey and wheat germ.